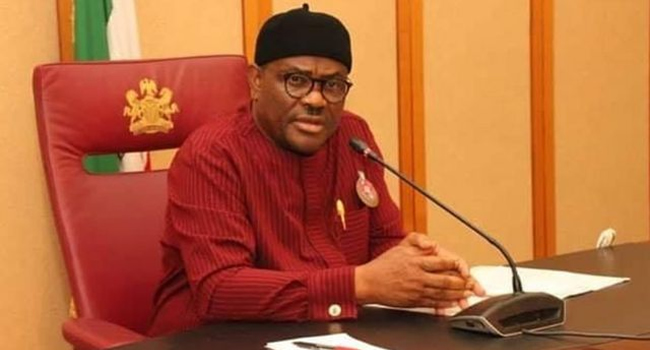 The Indigenous People of Biafra, IPOB has replied the Rivers State Governor, Nyesom Wike, saying that he is the worst of all the enemies of Biafra and IPOB.

The pro-Biafra group alleged that Governor Wike has a short memory, adding that his alleged recent statement that he (Wike) supports IPOB’s agitation against terrorists is an indication that he speaks from both sides of the mouth.

A statement by IPOB’s Media and Publicity Secretary, Emma Powerful, entitled ‘Governor Nyesom Ezenwo Wike is worse than all Biafran and IPOB enemies’, wondered if it is not the same Rivers State Governor Wike, that classified IPOB as a violent organisation and ordered that its members should keep off from Rivers State.

IPOB statement read in part, “The attention of the Indigenous People of Biafra, IPOB, under the command and leadership of our great leader Mazi Nnamdi Kanu has been drawn to the recent statement by Governor Nyesom Wike of Rivers State, claiming that he supports IPOB agitation, he is against Fulani terrorists in Nigeria.

“The recent statement from Governor Wike and his cronies shows that he is under the influence of something. And we ask, is it not the same Wike who classified IPOB as a violent organisation and ordered us to keep off from Rivers State?

“This is how Nigerian politicians lie blatantly without shame! Just because of politics, Wike has become a shameless liar.

He wants to be President of Nigeria and he can now afford to tell lies and deceive gullible people like him to become president.  Nigerian politicians and their short memory.

Wike knows he needs the support and vote of the Igbo and other Biafrans. That is why he suddenly turned out to be a supporter of IPOB. Was it not the same Wike that sponsored the broad-daylight massacre of Biafrans and IPOB members in Obigbo during the #EndSARS protest in 2020?

“Governor Wike cannot claim to be unaware of the great efforts and sacrifices of IPOB members in his election as Rivers Governor, especially in his second tenure when the evil forces in the seat of government in Abuja wanted to stop him at all costs.

“Our IPOB men and women paid the supreme price, standing firm behind him, thinking he can be trusted, but unknown to us, he betrayed us and behaved worse than our known enemies.

“All we are telling him is to stop lying with our name. He is never a supporter of IPOB or the Biafran cause. If he claims to be supporting IPOB, he should go and secure the release of all  those kidnapped  in Obigbo at his behest by the murderous Nigerian Army and detained in different army barracks in Abuja and Northern Nigeria.”