Yahaya Bello, the incumbent governor of Kogi State, is an astute businessman and a renowned politician. He was born June 18, 1975 in Okene, Kogi State. He’s the last child of his mother.

He started his primary education in the year 1984 and was a student of Local Government Education Authority Primary School which is situated in Agassa, Okene.

He attended Kaduna State Polytechnic in 1995, but bagged a degree in Accounting from Ahmadu Bello University, Zaria in 1999.

His love for the academic fraternity propelled him to enroll for his Masters in Ahmadu Bello University, Zaria, where he clinched his Master’s in Business Administration in the year 2002. Association of National Accountants of Nigeria also recognizes him as its member. He’s a sport enthusiast. 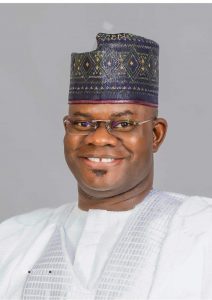 In year 2015, during the governorship election, Bello was declared winner after he was chosen by the All Progressive Congress (APC) party to replace Prince Abubakar Audu who was supposed to be the original winner but passed on before the results of the election were announced.

Bello returned as the governor for the second time on the 16th of November 2019, defeating the People’s Democratic Party’s (PDP) candidate, Musa Wada with over 200,000 votes. It is apparent that Bello is the youngest serving governor and a governor born after the Nigerian Civil War.

Controversies have been trailing Bello since he ascended the seat of power. Some prominent politicians, including Yahaya Bello were denied visa to America by the United State Department of State on the 14th of September, 2020, reason is that they undermined democracy in Nigeria.

Some renowned and notable activists applauded the US government and encouraged other advanced countries to do same. Bello was angered by this decision and he accused the American government of partisanship, claiming the Kogi State 2019 governorship election was peacefully conducted and devoid of election fraud as speculated.

Despite his assertion, there were reports and video evidence of violence and election malpractice during the time of the election. There were sporadic shootings from hired thugs and the electorates were scared and intimidated.

Bello stated in April 2021, that he had been conferred with an honorary professorship in Humanitarian Services, Human Resources Management and Peace Building from the distinguished and highly reputable St Thomas-a-Becket University, according to Bello’s commissioner for information, Kingsley Fanwo.

Howbeit, Sahara Reporters, after doing a thorough investigation, found out that Bello’s claims were reek of lies, as the university doesn’t offer a degree in human resources management, humanitarian services and peace building.

After a thorough investigation from Premium Times, it was reported that the government of Kogi had spent 300,000 naira on the Covid tracking software but Bello’s government claimed to have spent over 90 million on the software. Investigation has it that, despite the fact that this young governor showed his nonchalant attitude toward the pandemic, there was evidence of financial record showing that the Kogi State government had purchased Covid 19 risk assessment software which will last for a year for 90,720,000 naira in March 2020.

Denial of covid-19 and rejection of vaccination

Unlike other governors, during the spread of Covid-19 in year 2020, Bello aired his unbelief of the existence of the virus, arguing that it is nothing but a glorified flu that is comparable to common cold and catarrh. No wonder he never allowed the NCDC to test the people of Kogi to know if the flu was prevalent, so he ejected them out of the state. In doing this, Bello was able to keep his state, Kogi, running.

Yahaya Bello is a proud polygamist, he is married to three beautiful wives

He is blessed with several children.