Some overzealous correctional officers harassed journalists in court on Tuesday when they tried to cover proceedings in the trial of Chidinma Ojukwu, the 300-level Mass Communication student of the University of Lagos.

Chidinma is standing trial alongside one Adedapo Quadri at the Lagos High Court, Tafawa Balewa Square for the alleged murder of the Chief Executive Officer of Super TV, Usifo Ataga.

While she was being led away from the court after the proceedings, the officers numbering about eight, in an unusual manner formed a ring around the defendant in an effort to shield her from public glare.

Four other fully armed officers, in a dangerous manner, pushed and harassed journalists, and covered their camera lenses all in a bid to prevent them from filming and recording.

The incident led to a shouting match between the officers, journalists, some lawyers and other litigants present but the correctional officers ignored everyone as they swiftly led the defendants away to their waiting vehicle.

Earlier during proceedings, the Lagos State’s Deputy Director of Public Prosecution, Adenike Oluwafemi called the representative of Access Bank to the witness box to tender the statement of accounts of the late Usifo Ataga.

The witness, Taofeek Lawal, an account officer told Justice Yetunde Adesanya that the bank got a subpoena from the court requesting it to present the statement of account as well as a certificate of identification of the deceased.

The prosecution then sought to tender the documents presented by the witness. With no objections from the defence team, the court admitted the documents in evidence.

Chidinma’s counsel, Onwuka Egwu then sought to cross examine the witness. This move was resisted by the prosecutor who argued that the witness was in court based on a “subpoena duces tecum” and could not be made cross examined.

“The bank official is in court to produce the statement of account of the deceased in court.

There was a need to do this because the investigating police officers as part of their investigations had come across the deceased’s statement of account and being a computer-generated document, there was a need for it to be presented by the bank on whose system it was generated from”. 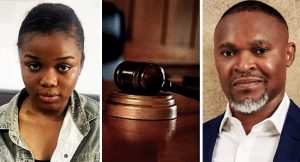 “That’s the main reason why the bank had to send a representative to present the document in open court based on subpoena duces tecum”.

“A subpoena duces tecum is a court summons which requires the witness to produce a document in court”.

“It is trite that the subpoena is simply for the witness to present the document in court for it to be admitted as evidence for the purpose of the trial. Such person need not speak to the document. He is not placed on oath and there’s no examination in chief and therefore cross examination would be baseless and not have any foundation”, said Mrs Oluwafemi

The defence counsel however countered by arguing that the witness as the account officer of the bank was in a position to give evidence in relation to the account.

He said, “It is trite that every legislation is subordinate to the constitution and one of the cardinal principle is fair hearing as provided for Under Section 36 of the constitution. Where the defendant raises the issue of fair hearing, he is entitled to be heard”.

“A subpoena duces tecum issued to deliver a document can be done either in person or through a representative who is discharged afterwards.

“If the defence counsel wants to cross-examine the witness, he can bring him back to court by serving him a subpoena ad testificandum which allows him to give oral testimony. In the absence of that, the witness cannot be cross-examined.” the judge ruled.

The court also admitted another computer-generated statement of account of the late Usifo Ataga from a representative of GT Bank.

Further proceedings in the matter were then adjourned to April 28th for the continuation of the trial.

Chidinma Ojukwu and Adedapo Quadri were arraigned by the Lagos State Government alongside a third defendant, Chidinma’s sister, Chioma Egbuchu on a 9 count charge bordering on conspiracy, murder, forgery, stealing and being possession of the stolen property.

They had all pleaded not guilty. (Channels TV)