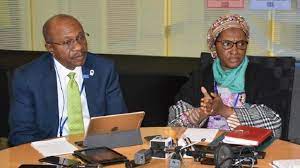 When the economy is doing well, the local currency is at its best with other international currencies.
Similarly, for any economy, its productive capacity has a profound impact on the strength of the local currency.
It is as a result of this that financial analysts have passed a verdict of failures on President Muhammadu Buhari over the dismal state of the Naira, Nigeria’s local currency which seems to have defiled all economic logic and currently exchanges at N580 to a US Dollar.
In some important respects, experts say that weakened Naira is a reflection of the lopsided development model of the economy, orchestrated by paralleled operational mode by the Central Bank of Nigeria which initiates and manages the country’s monetary policies and the Ministry of Finance which manages the country’s fiscal policies.
Clarifying the relationship on Arise TV, the governor of the Central Bank disclosed that the misconception is baseless stressing that at no time has he worked in opposite direction with the Minister of Finance, Zainab Shamsuna Ahmed.
He added that there is perfect synergy between the fiscal policy managers and monetarist.
According to him, “I am in good synergy with the Minister of Finance. We have been working harmoniously together and we will continue to work together for economic growth and the benefits of Nigerians,” he stated, adding that the success recorded by the government in providing succour to citizens in the country during the outbreak of pandemic has been as a result of the cordial working relationship.