Before the colonization of Africa by the Europeans, Igala kingdom had its own organized governing structure which covers Justice, economy, security, entertainment, and many other aspects that makes up a nation. 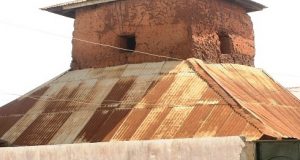 The Igala security comprises of Navy, Soldiers, and local Police.

As part of military tactics, the first storey building in Nigeria was constructed centuries ago in ancient Idah. This security tower was built in the Attah of Igala’s palace to monitor the four cardinal points direction of the palace against enemies.

Is has been known that no enemy takes Idah nor Igala nation unaware without being spotted from afar, and then prevented.

The tower is called Odo-ogo, which translates to “the wall beside the deep valley”. The top of the tower is meant to be manned by Igala Soldiers who are fixed at the top of the building to keep watch of the surrounding against enemy attack.

Odo-ogo tower was built during the reign of Abutu Ejeh who was the Attah of Igala land after the palace was relocated from Opuata to it’s present location near Ubiogba cliff.

While the top of Odo-ogo serves as a watchtower, the ground floor is used for some special purposes in the palace. Just like in the ancient Egypt, the resting place of any Attah of Igala who joined the ancestors is at the bottom of guarding tower.

Similar to the procedures used by the ancient Egyptian Pharaohs, the traditional mortuary before burial, the similar processes take place before any transited Attah moves to other world completely.

In modern day Idah, the ancient security tower is now a holy ground and people can’t go near it except those in charge of the monument. It is no longer used for the initial purpose of watching over Palace due to high population in Idah and expansion of the area, hence, other security methods have replaced that mode.

This is one of the historical spots of Igala Kingdom and could serve as a tourist center in Kogi state and Nigeria as a whole.

The entire building has remained intact for centuries since the days of Abutu Ejeh, the roof and walls have been untouched and have endured and resisted harsh weather conditions over the years.

A visit to the Attah Igala’s palace can give you a glimpse of the tower from a distance.