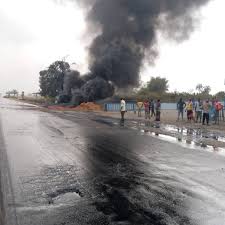 Many were feared killed on Thursday in a tanker explosion resulting from a multiple-vehicle accident on the Lagos-Ibadan Expressway.

The incident involved two vehicles and a fuel tanker which went up in flames around the Mountain of Fire and Miracles Ministry (MFM) Prayer City.

She said “A multiple crash involving a tanker and two other vehicles just occurred around Mountain of Fire church on the outward section of the Lagos-IbadanExpressway.

“There is an outbreak of fire at the scene. Motorists are advised to drive cautiously and remain calm until the fire is extinguished.”