Senator Smart Adeyemi (APC – Kogi West) has said that it is ill time for anyone to speak or start working towards succeeding governor Bello in January 2024.
Senator Adeyemi who stated this on Saturday at his country home Iyara while speaking at the sideline of the Iyara – Day celebration, also said any appointees who by now is planning how to succeed the governor is not only inconsiderate to the governor’s presidential ambition, but should be seen as an enemy of the governor. 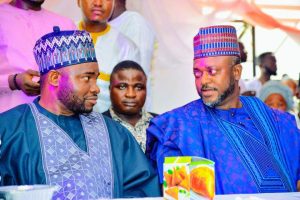 He equally said it is not expedient to speak about power shift in the state.

He said what is expedient for political actors in the APC is to first unite behind Governor Bello to achieve his presidential ambition; as the guber race is still afar off.

“As for me, I believe for now, nobody should talk about Governorship ambition or power shift. Nobody should be doing one program or another to curry favour for the guber ticket; weather school competition, debate or whatever disguised programs, because the presidential ambition of the governor should be the paramount.
“Any appointees or political players that is doing such is an enemy of the governor. Such person does not love the governor because it shows inconsideration to the governor’s ambition.

“If the governor became President, that is like getting the ‘elephant heads’; why should we then be preoccupied with small fries when we are targeting the ‘elephant heads’.”
Adeyemi said he has long keyed behind Governor Yahaya Bello ambition because he (Bello) remains the best presidential hopeful that can turn around the fortunes of Nigeria and make it one of the strongest economies in the world.

“Yahaya Bello is a youthful governor with so much energy, intellectual capacity and administrative acumen with an enviable record, who possessed what it takes to take the country to enviable heights.

“The governor has handled a tripartite state like Kogi with a detribalised mind, devoid of ethnic and religious sentiments, and he can reciprocate the leadership acumen at the higher stage.”
The senator said though it is not out of place for Kogi West to agitate for power shift for the zone, but it’s not needed, “The people of Kogi West should believe the governor for his promise to be fair, just and equitable to all the Senatorial district.

The governor still repeated it today (Saturday), and that is the most important thing about leadership…justice fairness and equity.”
The senator who begged that nobody should link him to any guber ambition, however reel out projects and program for the Senatorial district before the end of the year,

2. We are also starting our Health Insurance scheme for aged people in the Senatorial district from 70 years and above. We are doing this because we want to compliment the governor’s efforts in the health sector.”.