The ancient armoury in Egbe town.

Ile Oro came into existence during the Nupe raids on some parts of Yoruba Land.

The monument is about 12 feet tall and well sealed.
It hasn’t been opened since the last war.

The people of Ogba-onimosi plaster it anytime it has a crack to prevent anything from going inside or come out of it.

Is is believed that if a fly enters and comes out of it and then perch on someone’s skin, the person might die of poison and charm from the weapons inside of the armoury.

The structure is an ancient method to dispose off unwanted war devices like a nuclear waste.

It is poisonous, they use it to soak the arrows used to fight the Nupe war in the early 19s.

The crack brings out offensive odor and that’s why the make sure no crack at all around it.

Nobody worships the structure. It is only a disposable warfare poison that no body has figured out how to relocate or dispose.

Also there are sentiments surrounding it and the heroic nature of victory recorded in that fiercy war. 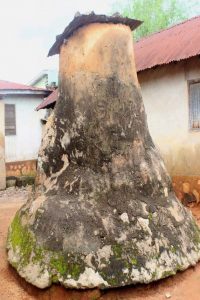 During the war, Egbe suffered many casualties at first, but after the development of these poison, Egbe side started having upper hand until the Nupe Aggressors, also known as Tapa retreated.

Who knows there may be some science in there.

But one thing is sure, Ile Oro is one of the Ancient war amories in Nigeria, and one of the places to visit for tourism if you’re in Kogi state.